Become a member of the National Football Foundation! 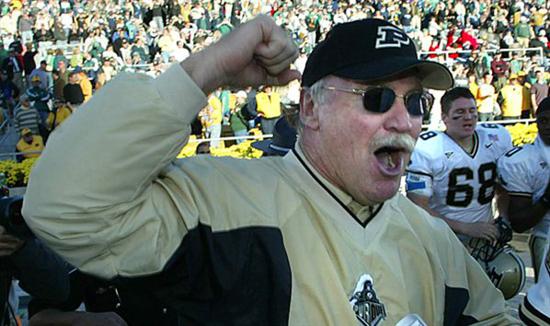 For the past 18 years, football fans of Purdue University and Northwest Indiana have been channeling some of their enthusiasm and support for amateur football through the National Football Foundation’s chapter based in West Lafayette.

In the 17 years since receiving its charter, the Northwest Indiana Chapter (which became the Joe Tiller Chapter of Northwest Indiana in 2007) has enlisted more than 850 members, becoming the largest chapter in the state and, at one point, was second largest in the nation.

The chapter typically plans several annual events in the area – highlighted by its marquee event, the Honors Dinner/Brunch “Celebrating Our Legends” each spring. Drew Brees, one of Tiller’s first recruits who led Purdue to the Rose Bowl in 2001 and a Hall of Fame quarterback with the New Orleans Saints, has been a guest speaker and presenter at several of the 17 dinners. At that event, the chapter recognizes individuals from the region for various awards and accomplishments, including the announcement of the chapter’s Scholar Athlete of the Year Award. As a non-profit organization, this chapter has awarded approximately $338,000 in grants, scholarships, honorariums and donations since receiving its charter in 2004.

This chapter offers scholarship opportunities for scholar athletes after graduation from 70 high schools in 17 Northwest Indiana counties (ranging from Tippecanoe to Lake counties). Selection of the Scholar Athlete of the Year is based 40% on academic achievement, 40% football performance and attitude, and 20% leadership and citizenship. In addition to seeking donations and sponsorships to support the scholarship program, the chapter also receives money ($500 for every 50 dues-paying members in the local chapter) from the national office in Irving, Tex. In its first 17 years, this chapter has recognized 391 scholar athletes, awarding scholarships or stipends to many of them for their second semester of college, totaling about $260,000.

Each dues-paying member receives a ballot in the selection process for the College Football Hall of Fame, a feature that helped elect former Purdue All-Americans Mike Phipps, Mark Herrmann, Otis Armstrong, Dave Butz and Rod Woodson to the Hall in 2006, 2010, 2012, 2014 and 2016, respectively. “One of the most important goals of the chapter is to help provide support for former players and coaches who deserve induction into the College Hall of Fame,” says Kelly Kitchel, the chapter president and a former Purdue player.

In addition to the scholarships, the local chapter has been involved in support of various youth programs and charities in the area and provides financial assistance for the Indiana Football Hall of Fame and the John Purdue Club’s 12th Boiler Scholarship Program.

The tax-deductible membership dues are now $60 per year or $150 for three years, payable to the National Football Foundation. The NFF has 120 chapters in 47 states and more than 10,000 members, nationally, and awards more than $1.3 million in scholarships per year while also administering the College Football Hall of Fame. For more information, contact Jim Vruggink (email: jvruggink@purdue.edu; phone: 765-427-3303; or mail: 3672 Farnsworth Drive, West Lafayette, IN 47906/ Celebrating our legends and creating new ones is this year’s focus of the National Football Foundation’s Joe Tiller Chapter of Northwest Indiana.

The Tiller Chapter is moving full-speed ahead with a busy slate of events and projects for 2022. The emphasis is to provide recognition for scholar-athletes and community members who support them and to raise funds for charities.

While fund-raising is an ongoing project, the NFF Honors Brunch “Celebrating Our Legends XVIII” on June 12 at the Purdue Memorial Union Ballrooms in West Lafayette was the organization’s feature event. With a sellout crowd of 353, it kicked off the busiest six-month stretch in chapter history.

Next up is NFF Night with the Lafayette Aviators on July 13 at Loeb Stadium in Lafayette, followed by the Tyler Trent Golf Outing Sept. 9 at Coyote Crossing Golf Club and NFF Honors Reception, which will feature the induction of former Purdue quarterback Kyle Orton into the Indiana Football Hall of Fame, that evening at Bruno’s Big O Sportsroom in West Lafayette.

After that, the chapter will sponsor a bus trip/car caravan to the Indianapolis Colts-Kansas City Chiefs game, featuring first-round draft choice George Karlaftis, on Sept. 25. Depending the on popularity of that trip, the Tiller Chapter may sponsor a similar trip to a Purdue football game in November.

The June 12 event featured presentation of eight chapter awards to community members and recognition of 17 NFF scholar-athletes who were nominated by their schools throughout Northwest Indiana for the annual Scholar-Athlete of the Year Award and 33 Lafayette Journal & Courier student-athletes nominated by high school athletics directors in the J&C coverage area. Also recognized were 11 J&C sport-by-sport players of the year selected by the J&C sports staff and the Indiana Football Coaches Association North All-Star nominees from Regions 1 and 4. Personalized certificates were presented to the 45 prep athletes who chose to attend.

The eight community awards were the results of nominations from chapter members and various entities to recognize outstanding accomplishments in NW Indiana communities. In addition, three former or current coaches were inducted in the Indiana Football Hall of Fame during the June 12 event.

The entire list of our award honorees are as follows:

All 60 students who were selected as all-stars for the North team were invited to this Honors Brunch. That entire list can be found at www.ifca.net.

The community awards included a tribute to Dr. Robert Hagen, who was the Tiller Chapter’s President when he died unexpectedly in March. The NFF Chapter presented his wife, Debbie, with the chapter’s highest honor, the Gold Medallion Award, for his incredible work in the Lafayette community as a top orthopedic surgeon, supporter of multiple charities (including serving as Chairman of the United Way Campaign and President of the Tiller Chapter) and a great fan of his favorite sports teams, especially Lafayette Jefferson Bronchos, West Lafayette Red Devils, Purdue Boilermakers, Florida Gators and the Detroit Tigers.

The four IFCA Hall of Fame inductees have come to their distinction by very different paths – three as coaches and one as a star quarterback.

John Hendryx graduated from Ball State University and immediately went into teaching at Carroll High School and coaching baseball for nine years before becoming head football coach in 1994. Now, 28 years later, he has the 11th most wins among active coaches with a record of 232-97 (a .705 winning percentage) including Carroll, Northwestern, Knox and his alma mater Winamac, including an 8-1 record last fall while winning his sixth conference championship.

Kevin O’Shea graduated from Franklin College, where he led the nation in passing after starring as an all-state quarterback at McCutcheon H.S. in 1982 when the Mavs finished as state runner-up. O’Shea’s prep coaching trail included stops at Delta, Attica, McCutcheon (where he coached Mr. Football Clayton Richard), Central Catholic (where he won five state championships and won 114 of 124 games in nine years) and now Indianapolis North Central. His 28-year record is 239-100 (.705 percentage).

Alex Yunevich graduated from Purdue University in 1932, after a stellar career as a running back at Bicknell H.S. and Purdue. He scored three touchdowns in Purdue’s first-ever win over Michigan and helped the Boilermakers to a Big Ten Championship in 1929. He went on to coach at Central State Normal College (now Central Michigan University) and Alfred University in New York, compiling a 41-year record of 187-98-13 (.649 percentage), including six undefeated seasons at Alfred. “Yunie” was selected for HOF induction in 1988, but the ceremony never happened and he died in 1992. He will be officially inducted posthumously on June 12.

Kyle Orton, who now lives in Iowa, will be inducted into the Hall of Fame in September when he returns to West Lafayette for the Tyler Trent Golf Outing during a Boilermaker football weekend. He graduated from Purdue in 2005 after compiling some of the most impressive passing statistics in Boilermaker history, including 9,337 yards passing and 63 touchdown passes in four seasons. Orton went on to spend 10 years (2005-2014) in the NFL with five different teams – Chicago Bears, Denver Broncos, Kansas City Chiefs, Dallas Cowboys and Buffalo Bills.

Tickets for the NFF Night at Loeb Stadium, which is a fund-raiser event for the Tiller Chapters’ Scholarship Fund, are $8 each, with half of the cost coming back to the scholarship fund. Price for the Honors Reception Sept. 9 at Bruno’s is $30 each for Orton’s induction into the Indiana Football HOF. Registration fees for the Tyler Trent Golf Outing are $150 per person or $600 for a foursome. Pricing has not yet been set for the Colts-Chiefs game trip of Sept. 25.

As a non-profit organization, this chapter has awarded nearly $260,000 in grants, scholarships and honorariums plus another $74,000 to other charities since receiving its charter in the fall of 2004.

Besides seeking donations and sponsorships to support the scholarship program, the chapter also receives money ($500 for every 50 dues-paying members in the local chapter) from the national office in Irving, Tex. In its first 18 years, this chapter has recognized 436 scholar-athletes and awarded them between $200 and $5,700 each.

The tax-deductible membership dues are $60 per year or $150 for three years, payable to the National Football Foundation. The NFF has 121 chapters and more than 10,000 members, nationally, and awards more than $1.3 million in scholarships each year. The chapter is seeking partners and sponsors for scholarship packages, which are also tax-deductible.